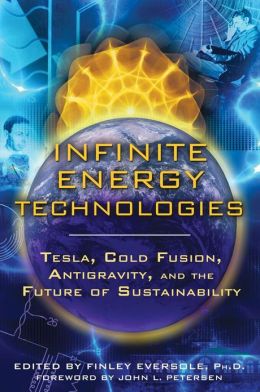 Exhilaration, enthusiasm, frustration, depression. These four words describe my reaction to this book.

Exhilaration: Pagan geek alert! “Infinite Energy Technologies” describes several scientists who, over the past 120 years, have developed technologies for cheap, clean energy generation. Part I includes profiles of the early leaders in the field: Tesla, John Worrell Keely, Viktor Schauberger, R. R. Rife, and T. Townsend Brown. All of these scientists realized long ago that reliance on fossil fuels was going to go very badly.

Enthusiasm: A number of viable energy technologies are discussed in Part II, including energy created with water, heavy water, and hydrogen. The Searl Effect Generator, cold fusion, and Zero Point Energy (vacuum) are covered in various essays. Once these methods are mastered and machines perfected, each home (and plug-in cars) could be powered by a small, independent energy generator. Bye-bye grid, so long ugly poles and wires, and hasta la vista gas and electric bills and stinky, expensive stops at the gas station!

Frustration: Plenty of obstacles have been placed in the path of development of cheap, clean energy. The book describes how they have been suppressed by “energy cartels, the US Department of Energy, the US Patent Office, the World Trade Organization, and businesses with vested economic interests in maintaining the status quo” (page 1). The science has been rejected, the US Patent office has refused to patent new inventions, or the scientist has been sidelined while his discoveries have been grabbed (stolen) and integrated into super-secret black ops military equipment like the B-2 Stealth Bomber. Energy scientists have been mocked, disenfranchised, omitted from science books, stripped of credit, and their work declared rubbish. In spite of the dire need to stop carbon emissions and reduce pollution and global warming, it’s going to be a long time before any of these clean energy technologies are openly available to consumers in the US and abroad. Given the stonewalling and resistance in the US, Japanese and European consumers may benefit from these technologies long before Americans do.

Depression: Is it a fairy tale for paranoid conspiracy theorists, or are multinational oil cartels and onshore power companies actively discouraging these planet-saving energy generators? It may not be as well-organized as a full blown conspiracy, but the results are the same. Industry and government deliberately prevent funding and development, so cheap, clean energy is unavailable to the public. It’s an exercise of power over power; the fiscal fist squeezing the planet of every last drop of dinosaur juice and the public of every last shekel. The public 99% in industrialized nations have less and less; the 99% in third world nations are forced into Faustian bargains that forfeit their forests and minerals for rudimentary development. And the third world’s 99% is turned into slave labor for first world consumers. All in all, a highly depressing scenario.

This book is a collection of essays with detailed endnotes that supply citations. Several of the writers bemoan the wrongness of the “power over power” hegemony. There are some useful extras at the end of the book. Of the greatest importance is the copy of the “Earth Charter” written at the 1994 Earth Summit with assistance from the Earth Council and Green Cross International. The Earth Charter (Appendix C) is “an international declaration of fundamental values and principles…for building a just, sustainable, and peaceful global society in the twenty-first century.” It encompasses environmental protection, human rights, equitable human development, and peace among all peoples. This document needs to circulate on Facebook and on the Web to every aware citizen of the world.

Tom Engelhardt’s essay “The Four Occupations of Planet Earth” (Appendix A) gives a scathing summary of the US corporate, financial, and military occupations of the globe in the past two decades. These occupations of greed and force are the reasons why the ethical standards of the Earth Charter haven’t gained any traction. The global Occupy movement of 2011 was a “blow-back” occupation reaction to the others, and one that underscored the vast inequities to the populations and the planet. None of the financial or military occupiers have suffered any penalties or imprisonment, either.

This book should be required reading for everyone who gives a damn about the welfare of Mother Earth. It should be mandatory reading for high school science classes. Editor Finley Eversole intends that this book should be the first volume on solutions to global problems with energy, economy, environment, health, food, agriculture, and global change. If he proceeds by gathering work by top-notch, well-informed writers for subsequent books, it will make a difference. This information needs to circulate and be discussed. Loudly. Very, very loudly.

The upshot of all of this is: If we, the people, want clean, cheap (or free) energy, then we must demand it. We must scream it to the sky and pound our little feet until the powers that be bow to massive public demand.

Kudos to Inner Traditions, the editors, and the writers who contributed to this collection of mind expanding essays. In the end, the best word to describe this book is HOPE.