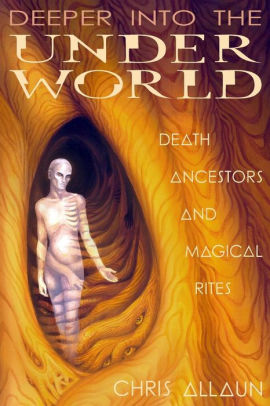 This is the second of two books written so far by Chris Allaun; the first was Shamanism, Myths and Magick vol 1 and Deeper into the Underworld presumes readers have knowledge of the first volume. I found this frustrating because not enough background is given for those who haven't read both books. While there are many interesting ideas, myths, speculation, and personal experiences recounted, errors in spelling, punctuation, and clarity detract from the reader's full enjoyment and confidence in the material. His style is easy to read. If you can function with a trust but verify attitude before accepting it as absolute truth, then you may be able to take away some useful practices and to open roads you might not otherwise have explored.

The author either studies or works in a range of traditions from shamanic to traditional witchcraft to ceremonial magick. Because his exact spiritual training is difficult to determine, his writing leaves the reader questioning how he knows what he states. Is it from personal experience, studies or just from reading? For me, the vague sources were crazy making. Besides the question of how he knows what he states, there is confusion due to the lack of attribution. Nothing is footnoted. There is an index but no bibliography. Allaun makes a lot of statements without reference to the source of the ideas. Are they his or is he failing to attribute them? Unfortunately, this book would not pass the muster in a Composition 101 class because of the lack of correct attribution. This turns a fairly interesting read into a frustration. I wish he would find a copy editor and a writing mentor who could hold his toes to the line with the discipline needed to write in a way that other authors and scholars would respect.

The myths about death Allaun presents in this work come out of various religious and cultural contexts making this an eclectic viewpoint. When speaking of Western European traditions, the author appears to be on sure footing; however, in non-Western traditions, I doubted him. One example was the author’s inclusion of the Ghost Dance. He notes that "to actually call this technique a Ghost Dance may be frowned upon by the Native American community." Yet after describing the history of the Ghost Dance, he asks the readers to create their own rendition of the Ghost Dance, but call it an Ancestor Dance. There isn't anything wrong with the Ancestor Dance exercise in itself. I would have preferred he just present it for its own merit without describing the Ghost Dance first. I don't think it helps that he states:
They do not like it when non-Natives or people who are not vouched for "steal" their spiritual practices.
The quotation marks on "steal" are his own.

Mr. Allaun's biography describes him as a Native American pipe carrier in the path of the Red Road. It should be noted that this is not an ancient tradition, but an English language pan-Indian concept popular in the New Age community. I don't believe that Mr. Allaun has actually trained for any length of time in a specific, traditional, tribal tradition. There is no evidence in his writing that he has any affiliation or connection with any spiritual elders of a particular tribal tradition.

The exercises he provides may help some people who are working through fear of death, grief over the loss of loved ones, or just trying to become comfortable with contacting spirit. There is an assumption that a person has done some kind of spiritual work before. It is helpful to already have experience with the practices of shamanism and to have previously read about Western Magick grimoires. If you are inexperienced and don't know how to enter into a trance for shamanic work, you may struggle to do so. Other exercises, such as guided meditation, are basic and can be done regardless of experience. Most of the exercises are simple to do.

His interest in darker aspects of necromancy in the context of a book that has a primary focus on connecting and honoring the ancestors struck me as incongruous. He seems to draw most of his knowledge of necromancy from medieval grimoires which were typically written by magicians with a Christian, Jewish or Muslim worldview. The idea of connecting with the ancestors is pagan or shamanic. I found his thoughts on medieval Christian magicians' views on demons to be intriguing and possibly valid. I did appreciate his sensibility regarding treating spirits with respect and treating the dead with respect. I couldn't figure out why he felt the need to discuss the use of corpses by black magicians. He takes the statements of what medieval magicians could do with spirits and dead corpses as truth. Allaun recommends cremation as a remedy and prevention of having a spirit drawn into someone else's dead body to achieve a dark magician's will. He seems kind of fascinated with the dark side in the same way that children are often fascinated by the macabre and the gross. This may have been better left for an entirely different book.

While I see some potential in Mr. Allaun to become a good writer, the poor editing of this book and lack of proper sources makes me caution readers that this book, while entertaining, cannot be assumed to be wholly credible.