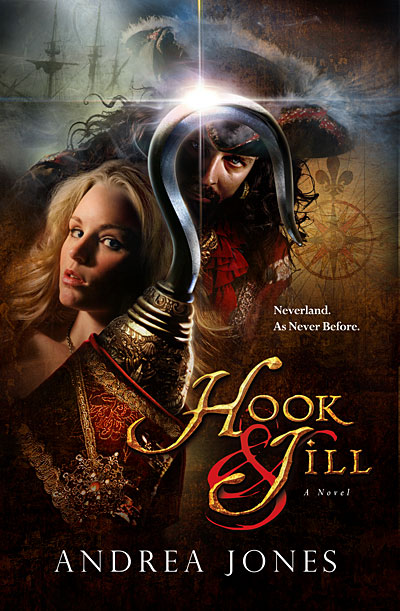 This is a very interesting novel. Before I really begin, I must confess that I’ve never read Mr. Barrie’s Peter Pan, although I am aware of the characters and basic storyline. I was never attracted to the original, feeling that a story about ducking your responsibilities and never growing up was . . . unrealistic. Perhaps even offensive. Hook & Jill, A Novel, was sent to me by the publicist because she felt there was a strong Pagan element to the story; I accepted because I generally like the re-telling of children’s stories.

Hook & Jill is just that: a re-telling of Peter Pan. This time around we are exploring the story from a more adult perspective. Children do grow up, they have to, and not everything – or everyone – can be viewed as good or bad, in simplistic black and white terms. I find it amusing that this novel received the Mom’s Choice Award for excellence in Adult Literature in Februrary of 2010, not because it is poorly written, but because this is not a story I would share with a child. I’m not sure you can be less than at least 16 years old to even begin to appreciate this story.

Hook & Jill addresses the hopeful adolescent longing, violence, and betrayal lurking beneath the glossy landscape Pan rules. While all of the original characters are given new details that deepen their characters, Wendy is the one who stands out in her transformation. I always had the feeling she was a bit of a pompous doormat in the original, here she is strong willed and intelligent, with a deep intelligence.

Here we see what happens when one person’s emotions deepen and she begins to long to move to the ‘next step’ but the other refuses to ‘grow up’. Sweet infatuation dashed on the rocks of earnest incompatibility. Moreover, Peter is like most children: selfish, rude, thoughtless and greedy. Then Hook comes along.

I was quite glad that Jones managed to avoid the pirate clichés and instead created a deft portrait of a man with an exquisite sense of what is right. He can be savage and hurtful, especially when in pain, but he also requires that everyone around him perform at their best. If Peter is youthful innocence, Hook is adult responsibility.

Clearly Jones is a good writer, but I found her lush style off-putting at times and more than once I lost track of what was going on and who was doing what. I think this is a style preference: I prefer more linear stories with relatively few characters so I don’t get confused. So, my disorientation is not necessarily a flaw in the writing. Overall, the writing is, as I said, lush. There is a steamy feeling that a good romance novel creates, and there is quite a bit of sexuality, which some may find shocking.

This is an edgy coming of age story based on a classic, well-written and fascinating.