The Book of Rulerships: Keywords from Classical Astrology 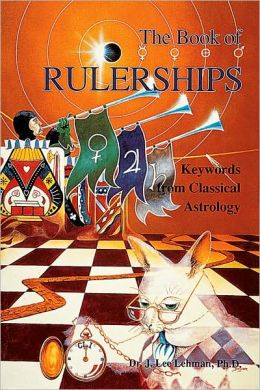 It’s been a long, long time since anyone published a book of astrological rulerships. The one most astrologers are familiar with is The Rulership Book by Rex E. Bills (Macoy Publishing, 1971).

Lehman’s book is a follow-up volume that stands in contrast to Bills’s book on several levels. Bills was from the school of 20th century astrological practice that supported the “astrological alphabet,” a learning system that equates house meanings with the meanings of a zodiac sign and its ruling planet. For example, First House=Aries=Mars. Furthermore, the invisible planets are sign rulers, with Pluto ruling Scorpio instead of Mars, Neptune ruling Pisces, and Uranus ruling Aquarius. Another modern theory is the idea of the invisible planets acting as “higher octaves” of the visible planets, with Uranus as the higher octave of Mercury, Neptune of Venus, and Pluto of Mars. These 20th century conventions had a garbled inception that was notable for its lack of a basis in solid research or a convincing chain of evidence. Over several decades, astrologers forgot the arguments that took place and accepted the propriety of the invisible planets as sign rulers.

In this book’s introduction, Lehman turns back the clock and examines the origins of the astrological alphabet and invisible planet rulerships. By the time Bills wrote his Rulership Book, certain objects and ideas had been assigned to the invisible planets. What Lehman takes the time to do here is show that this wasn’t orderly, logical, or consistent. If the invisible planets are higher octaves of the visible planets, then the attributions from inner to outer planets should have been fairly orderly. But this isn’t what happened, and Lehman picks through the changed attributions to take a head count of the things that got shifted to the rulership by the invisibles. It’s an inconsistent hodgepodge that severely weakens the octave theory and the basic premise of how rulerships of items, ideas, and other categories of existence are assigned.

The basic philosophy at work here is the Doctrine of Affinities, or the Doctrine of Signatures, which states that “the natural ruler of an object should be that planet, sign, or house most like that object.” (p 12) Lehman surveys the rulership assignments to plants, which were well represented in older astrological texts, herbals, and medical texts. She examines numerous texts to look for consistency and agreement of planetary attributions between different medieval astrologers: al-Biruni, Dariot, Lilly, Gadbury, and Ramesey, along with Culpeper, who compiled a famous herbal compendium. There was a mixed result of agreement and disagreement between these authors that divides into two main groups: Dariot-Lilly-Ramesey versus Culpeper-Gadbury. This suggests that Lilly was using Dariot as his main source, whereas Gadbury was using Culpeper as a source. Part of the reason for the divergent rulership assignments is the question of what the plant looks like (a non-medical rationale) or the medicinal use of the plant. In medieval times, a Jupiter-ruled plant was thought to cure Jupiter-ruled diseases. Dariot, Lilly and Ramesey adhered more consistently to the Doctrine of Signatures, which suggests that the rulerships this group of writers attributed to plants are relevant in a more general sense, whereas the assignments by Culpeper and Gadbury are slanted specifically toward medical properties.

The author offers two major purposes for this book: as a reference for the rules of astrology, and as a guide to the classical texts since the book acts as a concordance of medieval texts by al-Biruni, Culpeper, Gadbury, Lilly, Partridge, Ptolemy, Ramesey, and Saunders. Sometimes these older sources agree, and sometimes they don’t. Sometimes the disagreements may be traced to differences in the culture or the meanings of the words, which changed over time. Some stem from the astrologer’s opinion of what the rulership should be based on his methods of practice, experience, and thinking.

The bulk of the book is the Alphabetical Listing of Rulerships, which occupies pages 27 to 236. Following this, there is a listing of Planetary Rulerships, Sign Rulerships, House Rulerships, and a glossary of 17th century medical terms. A list of references is given at the end of the text.

In the Alphabetical Listing, each item is followed by the glyph for the assigned ruler and a set of abbreviations that indicate the authors in agreement with this assignment, and the page number of the reference. For example, “End of the Matter  4th House  GA050, LI052, PA043.” (That is, Gadbury, page 50, Lilly, page 52, and Partridge page 43). Things can be listed more than once if the various authors diverge on the attributions. “Epilepsy” has six entries, and its various suggested rulers include the Moon (which has the most agreement), Mercury, Mars, Saturn, Aries, and the First House. “Liver” has ten attributions that include three planets, three zodiac signs, and four different houses. “Liver Disease” occupies nine more listings, which are mostly dominated by Jupiter. Some of the assigned house rulerships are obviously derivative houses.

There are no attributions to Uranus, Neptune or Pluto, and obviously there are no references to modern inventions, psychological, or medical terms. Even rather common topics of inquiry may be missing here. For instance, Lehman’s book gives no listing for the terms “isolation” or “loneliness.” Bills’s Rulership Book does list these terms with the attributions of Saturn and adds the 12th house for loneliness and offers many more terms. His bibliography lists some of the greatest astrologers of the 19th and 20th centuries as his sources, but he doesn’t indicate the source in the alphabetical listings.

Both Lehman and Bills have performed a garbage collection job in these books. All of this information has been lying around for centuries, but it takes a person with a lot of meticulous patience to gather it all together and make sense of it. Lehman’s Book of Rulerships does for medieval astrologers what Bills did for 19th and 20th century astrologers, but with a careful scholarly approach that gives a chain of evidence. They offer different viewpoints of astrological attributions, thus creating reference books that are well-organized and easy-to-use. Astrologers have good reason to be grateful to both of these authors for taking the time and trouble to compile this information. I’d assign the job of writing astrological rulership books to Capricorn, which Avraham ibn Erza says is the sign that performs thankless and sometimes stinky tasks.

It seems best to end this review with a vote of gratitude and a firm recommendation for astrologers to get Lehman’s Book of Rulerships to stand alongside Bill’s Rulership Book.